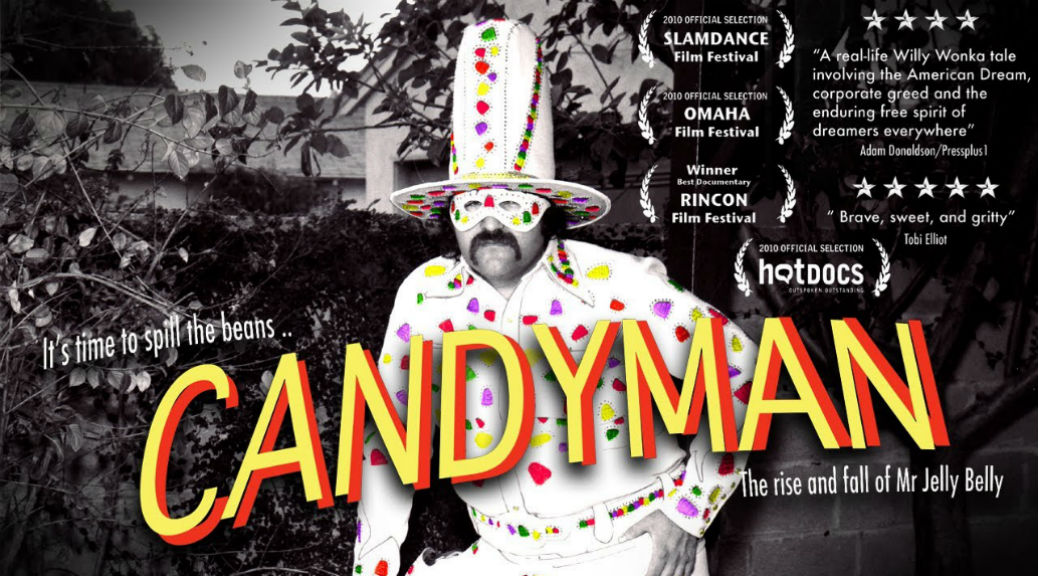 
This weekend, my wife and I wanted to watch something with our daughters, ages 11 and 7.  The image of a Jelly Belly jellybean caught my attention, and I used this delightful movie to introduce the kids to documentaries.  They loved it.

Early in Candyman, the wonderful documentary from Costa Botes, David Klein, the inventor of Jelly Belly gourmet jellybeans makes an admission – “I regret the day I came up with them, I really do.  Why?  Because they ruined my life.”  For the rest of the story, we learn how that could be so – how the invention of a candy that revolutionized the industry – and made millions of dollars – could be seen as a curse to the man who should have become Willy Wonka incarnate.

In the early 70’s, David Klein graduated from the UCLA law school.  He was a brilliant student, but forsook the law for his true passion – candy.  He threw himself into the business, applying the same brilliance that catapulted him to the top of his class to the sale and distribution of candy and nuts.  Before long, he was a fixture in Southern California, an honest, hard-working man, who not only sold candy, but also dreamed up new products.

In 1976, the Jelly Belly was born – and should have died a quick death – but Klein’s chutzpah, mixed with hard work and serendipity, combined to overcome the initial obstacles and become a cultural phenomenon when Ronald Reagan made them a staple of his White House.  In all of this there was Klein, tirelessly (and shamelessly) promoting the product for anyone willing to cover it.

It’s often at the moment of our greatest achievement that the seeds of our destruction are born, and such is the case with Klein.  Around the time of the Reagan endorsement, demand for Jelly Bellies was such that there was a one-year wait-list.  Klein’s manufacturing partner wanted to expand their factory, but without ownership of the Jelly Belly trademark, financing was iffy.  The CEO called a meeting to attempt to buy the company from Klein, and in a decision that, from the comfort of my couch, is insane, Klein sold out for 4.8 million dollars – without a lawyer present to represent him.

At the time, Klein was young and had an elderly partner that was ready to retire.  He figured there would be other genius ideas, but to-date, they haven’t arrived.  Instead, Klein sank into depression, having sold off his baby at a ridiculously under-valued price.  It’s a fascinating piece of storytelling.

Candyman could easily be seen as tragedy, but for the spirit of its subject.  Klein’s son Bert co-produced the movie, which explains the volume of home movies, photographs, and interviews with family and friends that exude a labor-of-love quality.  What emerges is a kind, honest, resilient family man who has spent his career putting others first, even to his own detriment.