Warning: Parameter 2 to wp_hide_post_Public::query_posts_join() expected to be a reference, value given in /homepages/20/d387371247/htdocs/wordpress/wp-includes/class-wp-hook.php on line 288
 Trump and The Challenger | ScottSlucher.com 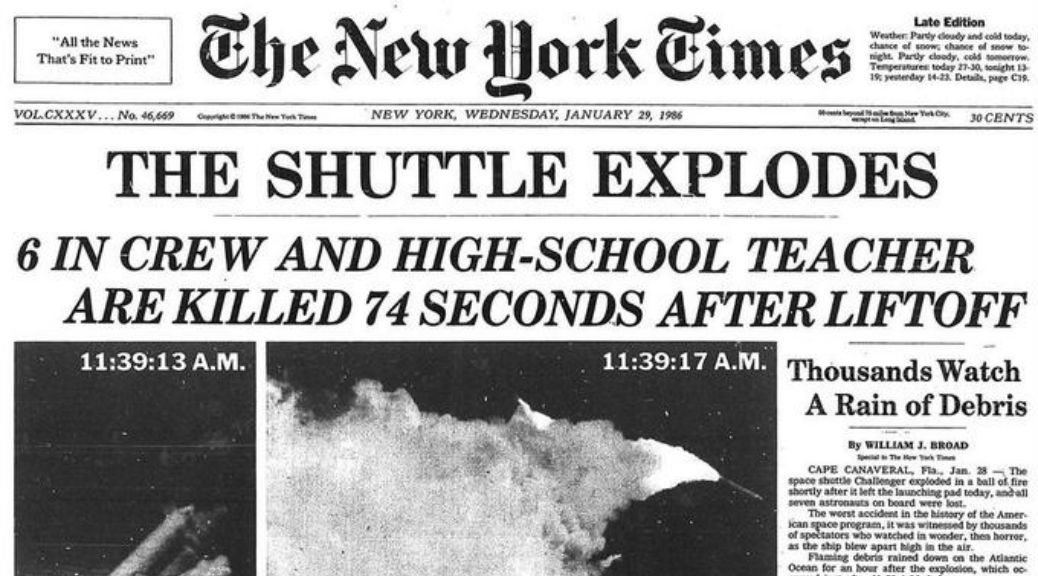 
Today, the big story is Donald Trump and his refusal to take part in another of a long series of pointless Republican debates. Say what you will, but the man knows how to control the story. Every time his numbers have dropped during this election cycle, Trump has rebounded through aggression and bluster. 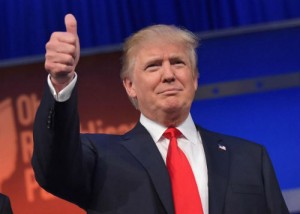 Earlier this week, Trump announced that he won’t participate in tonight’s scheduled Republican debate. It’s a story too tiresome to detail here, but the bottom line is that he’s doing what no politician in memory has been able to do – win by staying on a constant offensive by being bullying and…offensive.

How ironic that this latest episode of Trumpian bluster would take place on such an ominous anniversary. I’ll never forget where I was on Tuesday, January 28, 1986, around 11:39 am – in bed.

I was a sophomore at the University of Louisville and working third shift at United Parcel Service’s air hub at Standiford Field, loading aircraft in the Next Day Air operation. I’d get home around 6 or 7 in the morning, and often pass my Dad as he was on his way to work.

On that Tuesday morning, I was in my bed sleeping, when Mom burst into the room yelling for me to get out of bed and see what was happening on TV. We sat there together, numb and silent as we watched, over and over, the horrific site of the first the fuel tanks and then the rest of the space craft explode into those twin plumes of steam and debris that marked the point of disaster.

Tears were shed, especially as newsmen focused on the death of Christa McAuliffe, “the first teacher in space,” as she was known in the weeks leading up to the mission. It was a terrible day made worse in the weeks, months and years to come as hard truths were revealed about known problems with launching the space shuttle in cold temperatures.

During the ensuing House Committee hearings and the Rogers Commission report, Americans became familiar with Morton Thiokol, the manufacturer of the O-rings that failed in the cold temps. Word got out that engineers at the Marshall Space Flight Center tried to warn management that there were problems with the O-rings, but managers ignored the warnings and stayed on schedule. 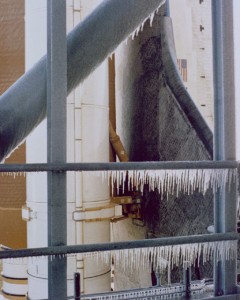 The launch of the Challenger was marked by delays. For about a week, the launch was moved back, day-by-day, as bad weather and a minor equipment failure postponed the mission. Finally, on the day of liftoff, it was engineers from Morton Thiokol who raised concerns about the integrity of the O-rings in the freezing temperatures and plainly visible ice, hanging from the launchpad scaffolding.

When the issue of yet another postponement was raised, NASA management brushed aside the warnings and went on with the launch, a decision that would be nuanced, explained, then re-explained during the much-publicized hearings.

There are so many lessons to be learned from the Shuttle disaster. Some good, some bad.

On the one hand, you have the triumphs of the space program and the promise of discovery and achievement. To think of the millions of parts and pieces that go into the construction of a shuttle orbiter and the rockets that launch it into space is to be overwhelmed with mind-blowing complexity.

The scores of men and women who have contributed their talents to solving the problems of leaving the chains of gravity and the earth’s atmosphere is as terrifying as it is impressive, but it’s been done. Many times.

And then there are the brave men and women who were to pilot the Challenger and conduct experiments and do their jobs during the mission. Bright, motivated people who, even in the face of possible annihilation, eagerly anticipated their turn to go into space. These people are role-models and patterns of success, drive and determination.

But then you have the failures that were driven by mindless bureaucracy and a disregard for the people who trusted their lives to the managers and scientists who constructed the spacecraft. People who gave in to political pressures and selfish agendas. People who certainly knew better, but made reckless decisions anyway, hoping for the best and fearing the worst.

And then there’s the lesson of humility. During our mountaintop experiences, like the moon landing, it’s easy to become full of one’s self, to believe that ANYTHING is possible. In Greek tragedy, it’s called hubris – an excess of pride that blinds the protagonist to reason and eventually leads to his downfall.

To me, the twofold lesson of a tragedy like the Challenger Disaster is first, that we should never stop dreaming big and swinging for the fences. To create is to imitate God, who works in immense beauty on an unfathomable scale. And that’s where the second lesson comes in – even as we are attempting what has never been accomplished, we should never lose touch with humility and truth and honor. To ignore these rules is to play God and end up like the protagonist in a Greek tragedy.

Thirty years down the road, we still haven’t learned this lesson. Just look at Donald Trump, and you see the same runaway arrogance that brought NASA to its knees thirty years ago.

Tonight, the Republicans – sans Trump – will claw each others’ eyes out on national TV while The Donald grandstands with a group of veterans elsewhere, apparently very much in control of this political moment.

But don’t be fooled – the meter is running and Trump’s time in the driver’s seat is only momentary. Like old King Oedipus, it’s a matter of time before the check comes due on his unbounded hubris.