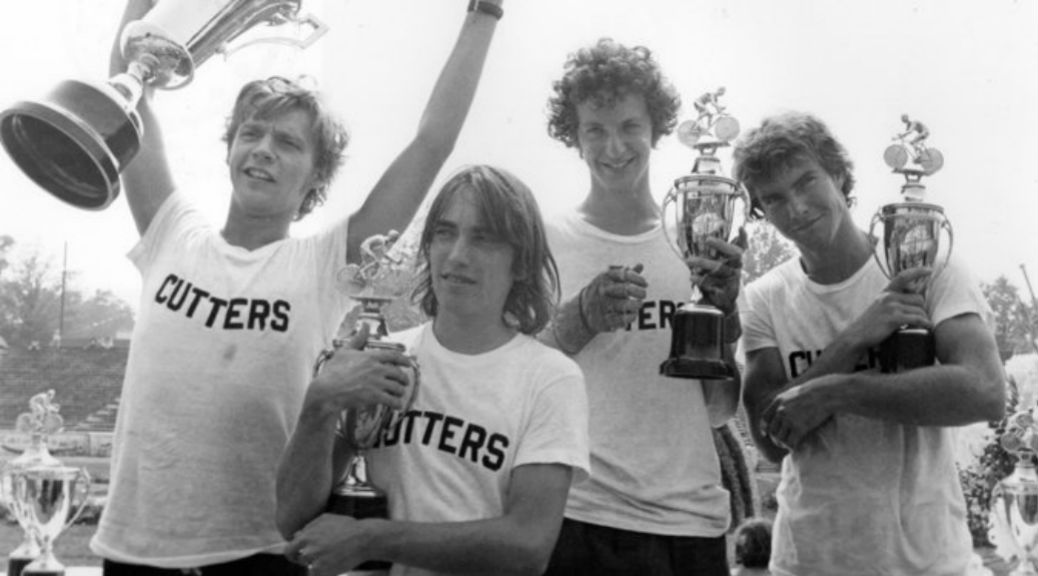 #9. Breaking Away (1979)  Breaking Away will always have a spot on my top 10 favorites list because of the influence it had on my life.  I saw it with my family when it came out in ’79, and it sparked a passion for cycling that has never burned out.

The story, set in Bloomington, Indiana, is about a group of four townies who are stuck in the no-man’s land between high school and adulthood.  They are referred to by the college kids as Cutters, a derogatory reference to their blue-collar fathers who work in the nearby quarries.  And so, in addition to being a coming-of-age story, it’s also a story about class, and more specifically, identity.

Dave Stoller is a Cutter.  He’s a dreamy, goofy kid with only one noticeable talent – cycling.  His backstory involves some undisclosed illness in which a bicycle aided in his recovery.  The bike has become an extension of his identity, and to his friends and family, he’s a harmless eccentric.  But he’s got real talent.  His obsession with cycling is manifested in his devotion to all things Italian.  His room is filled with posters.  He listens only to Italian opera.  He even speaks broken Italian with an exaggerated accent.  Did I say he was a bit goofy?

His friends include: Moocher (Jackie Earle Haley, who also played Kelly Leak in the Bad News Bears movies), a dirty, sweaty, dog-loyal redneck with a heart of gold, Cyril (Daniel Stern, from Diner and The Wonder Years), a lovable loser, and Mike (Dennis Quaid).

Mike is the former quarterback/captain of the football team who can’t come to grips with the fact that he no longer has a real team to lead.  He desperately tries to keep the four guys together, even insulting and badgering them as they start to feel out new directions in their lives.  He becomes the archetypal ex-jock – soon to be the old guy with the beer gut who was once the muscle-bound hero for the local team.

And so all of these boys struggle with identity as they grope their way into the next phase of their lives.

As a kid, I identified completely with Dave.  Untouched by the harsh realities of life – in contrast to his cynical, hard-working father (brilliantly played by Paul Dooley) – Dave lives in a dream world where he passes himself off as an Italian exchange student in order to escape his drab existence and possibly win the love of a beautiful coed at Indiana University.

This carefree, head-in-the-clouds existence is galling to Dave’s father, who resents his son’s optimism and worries about his future.  And there to mediate this generation gap is Evelyn/wife/mom (Barbara Barrie, in an Oscar nominated performance), who knows how to encourage her son’s dreams while soothing her husband’s frustration.  She’s a cross between June Cleaver and Henry Kissinger.

Dave gets his dose of real-life soon enough when two events come together at once.  First, he has a hand in his father’s heart attack in a comic scene where used-car salesman dad argues with a dissatisfied customer who tries to return a lemon.  The second, and perhaps more damaging, incident occurs when Dave finally gets to race against his heroes from Italy’s Team Cinzano, who are touring America in exhibition races.  When the Italian’s can’t out-ride pesky Dave, they resort to dirty tricks and cause him to wreck.  In the process, they rob him of his innocence.

From there, things start to unravel for Dave.  He confesses his true identity to his coed girlfriend, who rejects him.  In turn, Mike loses confidence in himself and just about gives up his struggle against the smug college boys.  Moocher threatens to break up the team by secretly getting married.  Cyril is…Cyril.

Potential redemption comes in the form of yet another bike race.  Because of the bickering between the college boys and the Cutters, the school decides to open their annual bike race – The Little 500 – to a team from the town, which sets the stage for either cathartic revenge or crushing humiliation.

If the story sounds conventional, well, it is.  But it’s in the telling of the story – Steve Tesich’s writing, the acting, Peter Yates’ directing – that it rises above cliche and becomes something special.  Breaking Away has lost none of its resonance or charm.  Even after 31 years.