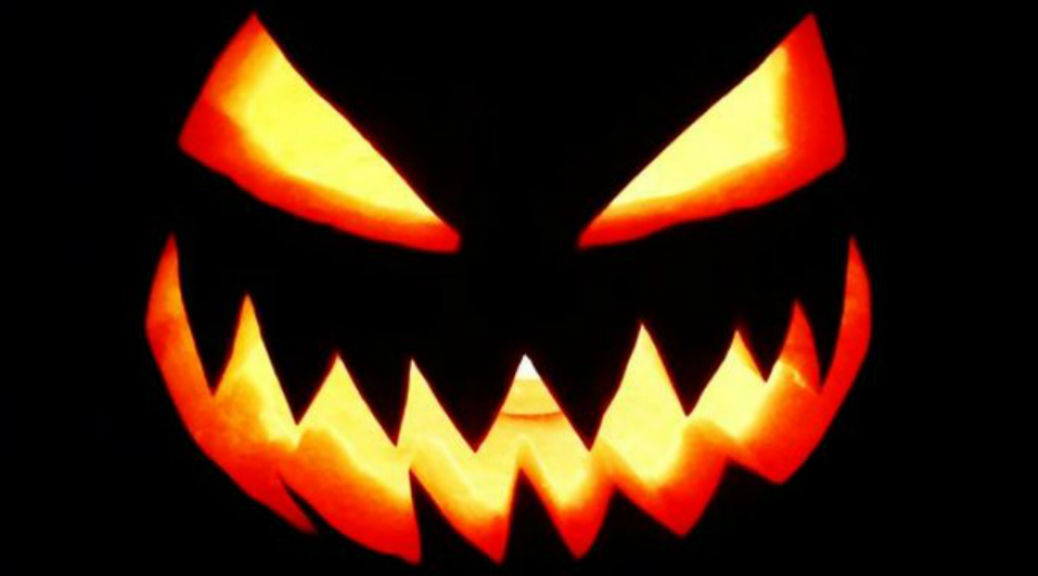 When I was a kid, carving pumpkins was one of the yearly rituals that marked the family calendar.

About a week before Halloween, Dad would come home with a pumpkin at least as big as a basketball, and on the night when we did the carving, Mom made us all snacks and made sure the kitchen table was covered with newspaper.

As with the Thanksgiving turkey, Dad did the carving.  First, he’d cut a hole in the top big enough for my sister and I to reach in and pull out the slimy seeds and stringy pumpkin guts.  We took our time at this task, playing with the innards and shaking them in each others’ face until Dad would tell us to knock it off so he could finish his job and relax.

With the pumpkin more or less hollowed out, Dad would take over and cut as gruesome a face as he could muster.  He had a talent for this sort of thing that would resurface years later in the form of beautiful wood carvings.

There were never any happy or friendly jack-o’-lanterns at our house.  Slucher jack-o’-lanterns were like the gargoyles on a medieval cathedral, meant to scare away evil spirits, but as hideous as they were, they failed to make an impression on the marauding teenagers who roamed the neighborhood late at night, looking for pumpkins to smash.

Every year, the morning of November first meant waking to find the streets covered with the viscera and busted chunks of every single pumpkin in the neighborhood that had been left out.  It was pumpkin genocide.

Last weekend, I rounded up the kids for the ritual carving of the jack-o’-lanterns.  My wife was working, so I also handled the newspaper and the snacks.  Each of my three daughters had their own pumpkin, which ranged from small to large according to age.

We held to my parents’ script, except that I let the girls draw the faces they wanted me to carve.  Ferocity is absent from my front porch, and in its place are three happy-go-lucky jack-o’-lanterns that are more Santa’s helpers than Satan’s henchmen.

Just as seasonal rituals like pumpkin carving at Halloween were important to me and my sister when we were kids, so too are they important to my own children.  My girls have embraced and taken ownership of the rituals in our house, which provide a sense of rhythm and continuity to a household that can often seem chaotic and improvised.

As my family celebrates the special dates on our calendar – birthdays, holidays, and other special times – my hope is that the repeated observance of these milestones will accumulate and build a backlog of happy memories, shared in the form of stories frequently told.