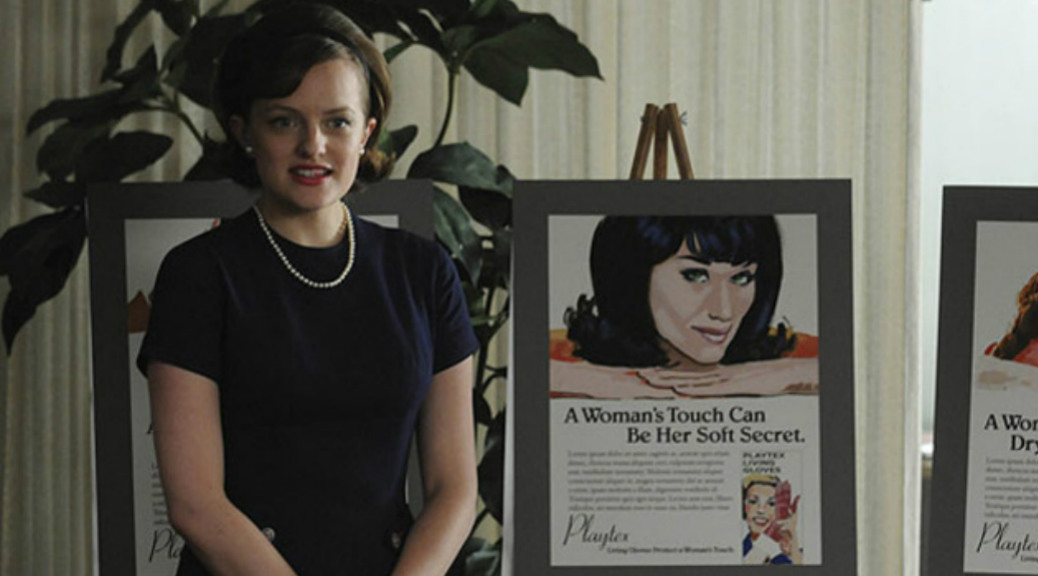 This week’s episode of Mad Men, “The Chinese Wall”, seemed like an opportunity for us to catch our breath and for the stage to be set for the season’s finale, which is coming in what, one or two episodes?  But first, what is a Chinese wall?  The term got its start in the financial world, but has been extended to refer to any barrier that restricts the flow of information within an organization.

This week, the cat is let out of the bag on Lucky Strike.  Roger has been acting as a Chinese wall, keeping the news of the impending loss from everyone at SCDP.  Ken Cosgrove, while on a date with his fiancé and future in-laws, runs into a rival from BBDO, the firm that has won the Lucky Strike account, who informs him of the bad news.  Ken tries to resume his meal, but in this world, it’s business before pleasure, and he runs off to find Pete Campbell, who’s at the hospital awaiting the birth of his second child (the first being w/Peggy, of course).  Pete follows Ken’s work-first lead and the two of them call Don and wind up in Roger’s office with Bert for a late night summit meeting.  Losing this account is akin to getting a diagnosis of pancreatic cancer, so it’s all hands on deck.

Roger is the last to arrive, and pretends to call Lee Garner Jr.  With his thumb pushing down the receiver, he play acts at learning of the loss of the account.  After a heated exchange, he tells the men that he’s been hung up on.  Don immediately volunteers to go with Roger to North Carolina in the morning, but Roger rebuffs the offer, saying he’ll go it alone, knowing full well that the trip is doubly impossible, since he’s known about this for a week or two.

SCDP is in crisis mode.

As the pressure mounts, we see the principals in the firm tested, each in his own way.  Roger handles his by compounding his fraud by only pretending to fly to NC.  His call to Bert and the boys, the following day, is made not from the offices of American Tobacco, but from a nearby hotel room.  Roger’s fate as a totally irrelevant relic of a bygone era is all but sealed in this episode.  A mirror of this is represented in the death of a rival account man from a competing firm, a man with as WASPy a name as Roger’s – David Montgomery.

As everyone else in the firm is scrambling to protect the remaining accounts from a panic-induced flight, Roger sits in the same hotel room, drinking and feeling sorry for himself.  It’s all he knows.  Later, when he calls Joan and confesses, she’s obviously disgusted at his admission, and we can sense her respect for Roger (and thus, her romantic attraction) quickly fading to pity and perhaps anger, for now she is a Chinese Wall, if she chooses not to rat out her lover.

But at least Roger gets the best lines.  After paying a surprise visit to Joan at her apartment, in which he is rejected, Roger gets his coat and hat and pauses at the door.  “So that night we were mugged, that was the last time? [pause]  I wish I’d of known.”  Why, to savor the moment or take a bullet?  Bert gives what may be Roger’s epitaph the following day when he tells a defeated Roger, “Lee Garner never took you seriously because you never took yourself seriously.”  Touché’.

In the meantime, Bert and Don rally the troops, along with one of Lane’s lieutenants from accounting.  Don keeps the full impact of Lucky Strike’s departure from the staff, assuring everyone that even though the cash cow has died, everything will be fine.  Because Don is so highly revered, the staff seems to accept the news as a minor setback.

At the end of last season, Don led the rebellion that gave birth to SCDP, and in this episode, he is accountable for the failings of the firm.  Roger is as good as gone.  Bert is passé.  Lane is in London.  Pete is not ready for prime time.  And despite snapping unfairly at Pete at the loss of Glocoat, he handles himself fairly well…that is, until it comes to his women.

After a long day of being rejected by fleeing clients, Faye pays Don a visit to check-up on him.  As they talk, he asks her how she copes with rejection.  When she mentions angry clients, he asks which ones, meaning he wants some insider information.  Faye bristles at Don’s impropriety, offended that he would cross that line.  The scene quickly devolves to a fight in which Faye storms off into the night, but maintains her integrity…and dignity.

24 hours later, Don is wrapping up yet another rough day when Megan, his beautiful French Canadian secretary refuses to take no for an answer when she offers to help him work late into the night.  She out-Dons Don in this scene, smoothly seducing him (not exactly heavy lifting when we’re talking about Don Draper) by assuring him that their fling means nothing beyond that moment on that couch (we’ll see about that.  Can you say “Jane Siegel”?).  She’s done her homework, even going so far as to say that she, like Don, only judges people on their work, with everything else being sentimental.  Don, of course, is game.  Nothing clears Don Draper’s head like a one-night stand.

The cosmic check comes due on the Megan decision later that evening when Don finds Faye in the hallway of his apartment, leaving a note for him.  It may be a break-up note.  Fay invites herself in, and we find out, instead, that she’s compromised herself.  She’s brought Don a meeting with Heinz.  And with that decision, that toppling of the Chinese wall, we see some of the dignity leak out of another character.  The message is brought home when Don and Faye end up on the couch in the exact same pose as Roger and Jane from a scene or two earlier.  It’s a beautiful mirroring act.  Roger cares nothing for Jane, of course, and we’re left to guess that it’s the same for Don and Faye, a good woman who genuinely cares for Don, but who has sold herself out for him.

Speaking of Jane, after Megan and Don’s fling, there’s a cut to Jane at home, waiting on Roger.  This paring means something – is it that Megan, like Jane, is a conniving climber, looking for a trophy husband?  Perhaps.  She said she wouldn’t run weeping out of the office after her one-night-stand.  I think her grasping of Don’s arm, followed by warning against drinking too much might be a clue as to whom we’re dealing with.  She makes an implicit promise to be discrete – to keep this information to herself.

And then there’s Peggy.  In this episode, we see Peggy reach an important milestone in her career, but it’s as if it’s merely a footnote to the larger drama.  Indeed, Peggy spends the episode cut off from the rest of the SCDP action, in her own little bubble on the outside of the fear and drama that has come with the Lucky Strike bombshell.  While everyone else is running around putting out fires, Peggy is happy-go-lucky, taking the pressure of giving a solo pitch in stride, suffering the constant hazing of Stan with good natured aplomb, and knocking her pitch out of the park, despite having lipstick smeared across her teeth.  Sometimes walls punish.  Sometimes they protect.  For example, by not knowing that she had the lipstick smeared on her teeth, Peggy had no self-consciousness.

Though she’s only in a few scenes, the one’s where we see Peggy are priceless: the relaxation exercise with Stan, designed to loosen her up before the big pitch (and give Stan an opportunity to steal a kiss); the meeting with Danny, where Peggy does her own take on a Don Draper poetic finale to a presentation.  And of course, her lipstick smeared pitch.

Finally, there’s the funeral scene, where Bert, Don, Pete, and Freddy Rumsen have gone to troll for business.  It’s a beautifully constructed moment.  Montgomery’s widow and daughter sit next to the dais, glum and vacant.  Two speakers give remarkable speeches that are designed to be testimonials of what a great guy Montgomery was, but what we learn instead is that he spent almost all of his time away from his family.  One man tells of the time Montgomery missed his daughter’s fifth birthday (cut to Pete, missing the birth of his own daughter) to win the Buick account in Detroit.  Montgomery compensated with a thoughtful present.  Another man told of the thimbles Montgomery collected in England while away on business, yet another male-oriented testimonial to the man’s sensitivity – that somehow, the tokens that Montgomery purchased should be sufficient substitutes for having the actual man present in the lives of his wife and daughter.

And it’s here that the meaning of the Chinese wall is expanded, I think, to include the barrier between work and home.  Don and Pete and Ken and Pete’s father-in-law have all, like the deceased Montgomery, put work before family, and only Don seems to grasp this during the eulogies for the dead rival.  And seeing that Don recognizes this on some level is what is so infuriating about the man.  There is depth to him, for sure, but he can’t pull himself out of the muck and mire of the bad decisions he can’t quit making.

And so, at the end of the episode, as Don sits on the couch, a mirror of his hollow mentor, we can only guess at his state of mind.  Is he repentant of his transgressions against Faye, or is he only sleeping, having moved already moved on, if only in his mind?