Warning: Parameter 2 to wp_hide_post_Public::query_posts_join() expected to be a reference, value given in /homepages/20/d387371247/htdocs/wordpress/wp-includes/class-wp-hook.php on line 288
 snow-MEH-geddon | ScottSlucher.com 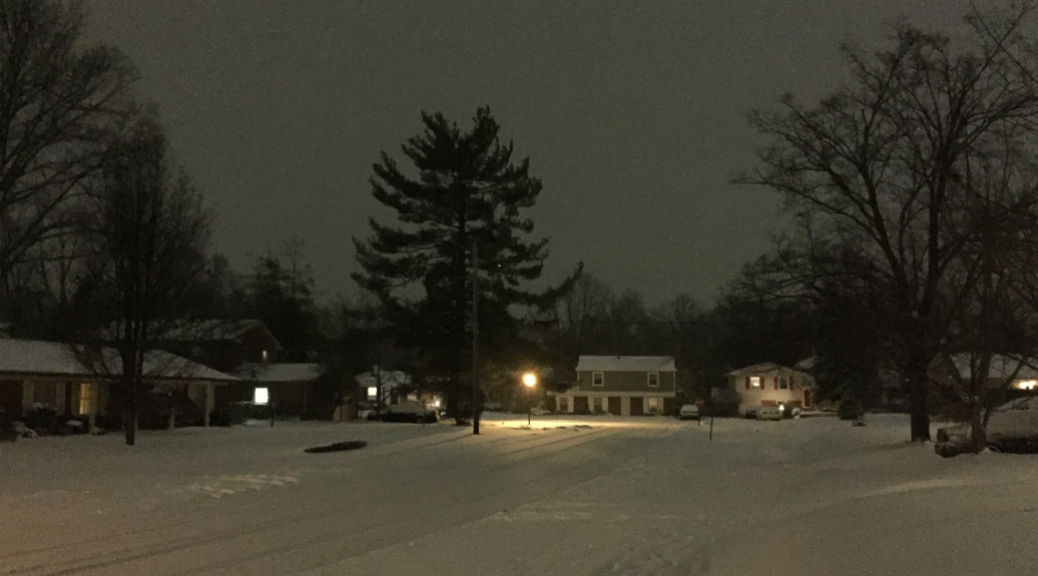 So, the weather guessers were at it again, spreading fear throughout the the land with their hopeful predictions of gloom and doom in the form of blizzard-like conditions throughout the Bluegrass region of the commonwealth today.

Instead of an arctic blast, we got a lot of hot air.

But no worry. What snow we had was good enough to get out for a while this afternoon and hit the local hills. Here’s what it looked like.

We started in one neighborhood, but quickly returned to our own, where we ran into some neighborhood kids, one of whom ended up in the creek at the bottom.

This reminded me of when I was a kid, during the winters of ’77 and ’78, when the Ohio River last froze over. Me and my sister got sleds for Christmas one of those years, and one day, my Dad took me and Shana over to Bobby Nichols golf course, where there were some great sledding hills.

There was a lot of snow on the ground that had also been covered over with a thin layer of ice, making the hills more like a luge track that a ski slope.

The three of us trudged to the top of the main hill and looked down its steep bank to where it flattened out at the bottom just before the creek.

Dad decided it would be best if he went first, to see what the conditions were like. There were a few folks there going on about how fast the hill was. The snow was so deep, the sled traffic still hadn’t worn down to expose the bare ground.

Dad took one of our sleds and picked a line. He was dressed in jeans and his new North Face parka and a toboggan. The coat was a novelty in the south end, and we thought he looked like the Michelin Man, all puffy with roll after roll of feathered compartments.

Dad put the sled on the ground, gave it a nudge with his foot then took and step and lunged onto it. Normally, a person his sized would sink in the snow and start off slow before gravity and viscosity took over, but on this day, Dad shot down that hill as if from a cannon. My sister and I laughed and cheered at him as he flew down the hill.

When he got to the bottom, instead of slowing up, the sled kept going, as if still on the slope, and Dad didn’t stop until we saw him disappear over the creek bank. In my memory, he hung in the air a moment, just like Wile-E Coyote, in the Road Runner cartoons, before falling into the creek and making a huge splash.

Our laughter caught in our throats at the violence and surprise of what had just happened. We’d been to Bobby Nichols many times before, and had never seen anyone get so close to the water. And so we stood there for what seemed like and eternity, but was really a nanosecond because Dad shot up out of that water like a cat that had just fallen into the bathtub. He climbed the bank and waved us down and took off running for the car. He was soaked from head to toe.

Me and Shana got down the hill as best as we could. She was now scared and whining, and I was trying to manage her and me and our other sled. When we got to the bottom, I sent Shana to the little foot bridge that crossed the creek with the sled, and I went to where Dad had fallen in to fish out the other.

By this time, Dad had the car running, and was honking for me to hurry. I ran as fast as I could across the crackling, ice-covered snow to the car, where the trunk was open and waiting for me.

When we walked through the front door of the house, we hadn’t been gone for more than 20 minutes, and Mom was surprised to see us. Dad was peeling off his clothe, shivering and heading for the bathroom, where he took a hot bath.

That’s what I was thinking about, when I heard that Seth from across the street had fallen into the creek with his sled.