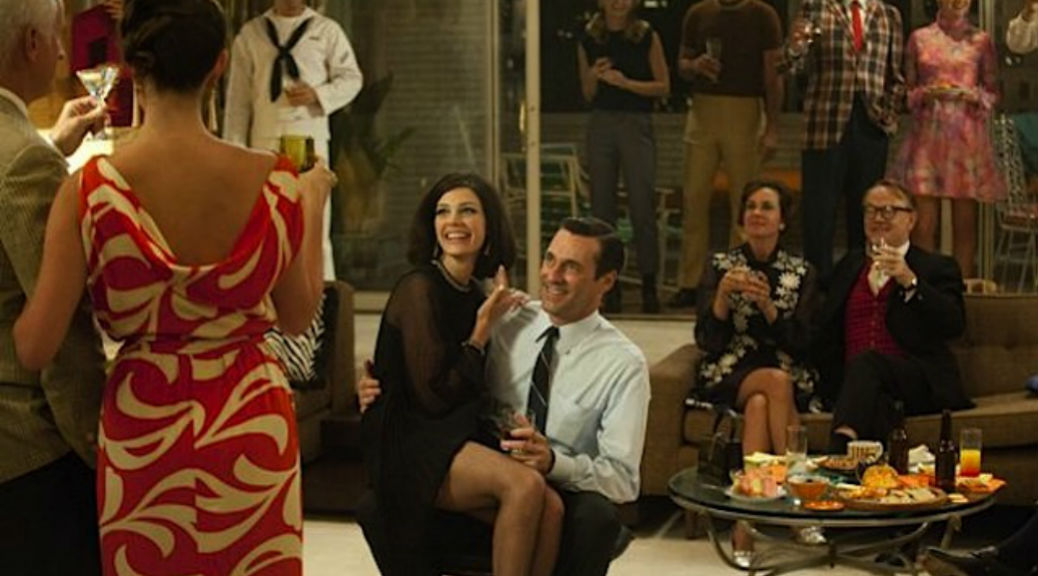 My memory of Gilligan’s Island is that every few episodes, the castaways would put on some kind of talent show that included a sexy show-stopper with Ginger singing something like I Wanna Be Loved By You in a Marilyn Monroe-esque sex-kitten style – usually sung to the Professor.  I never paused to consider the foolishness of such things because: a) I was a kid, b) it was Gilligan’s Island, and c) it was Ginger.

The premiere of season five of Mad Men had a similar vibe, reminding me of an episode of Bewitched or Gilligan’s Island, even though it was Megan and not Ginger/Joan who did the singing.  The question I keep asking myself is this – was it intentional, or has Mad Men lost its way?

The show opens in 1966 with a protest by African Americans and a few whites on the streets in front of Young & Rubicam, a rival agency to Sterling, Cooper, Draper & Pryce.   Some junior admen, tired of the noise the protesters are making, have some fun by dropping water bombs on them.  And thus, Mad Men does a cannonball into the back half of the 1960’s, where the social changes that have been mostly ignored by the Mad Men are lining up like protesters at a sit-in.

After this introduction, we are re-introduced to the SCDP gang.

Don is living in a fancy new apartment, with unpacked boxes, the kids visiting for Memorial Day weekend, and a fortieth birthday looming on June 1.  Despite this milestone, he seems content, happily making breakfast for the kids and making plans for how to spend their weekend together.  He’s like Uncle Bill in Family Affair.

Pete is living in Greenwich, taking the train to work as Don once did.  A conversation with a neighbor reveals that an improvement in Pete’s living arrangements hasn’t reduced the tensions in his marriage.  In fact, Pete’s angst has spilled over to his wife, the proof of which is that she hardly ever changes out of her robe – a cardinal sin in his world.

Joan has a baby (Roger’s, remember?) and is bickering with her mom, who has come to help with a difficult adjustment.  Doctor Greg is still not around.

Peggy, and the gang are up to their old antics, and she is still the den mother to clowns not too unlike the Y&R guys who threw water bombs on the protesters at the opening.

Roger is bored and hitting on secretaries and entertaining Pete’s clients while Bert is more marginalized and Layne is, well, Layne – awkward and out of touch with everyone, including himself.

The table set, we learn that Megan is planning a surprise birthday party where we get another roll call – this time of ghosts of Mad Men episodes past – when Megan reviews Don’s rolodex with Peggy, looking for people to invite to the party.  Peggy warns Megan that “men don’t like surprises,” but the warning falls on deaf ears.

A couple of things about Don stand out in this episode.

The first is that he seems content in his marriage and fancy new apartment.  Megan is working at the agency as a junior copywriter, so we’re left to assume that Don’s womanizing has taken a hiatus.  He’s so content that he seems indifferent to his work.  In a meeting with Heinz, when the client rejects a concept that Peggy has presented, Don waltzes in on cue, but fails to save the day.  Rather, he agrees with the client and promises to try again and do better.  Peggy is dumbfounded.  In addition to his indifference, Don doesn’t seem to be working a 40-hour workweek, coming in late and leaving early.

Worse than Don’s laissez faire attitude about work is a sense of impending mortality.  When he drops the kids off at Betty’s, at the beginning of the episode, he asks Bobby how old he’ll be when Bobby is 40.  Bobby replies that Don will be dead.  Wasn’t it Chekhov who said that if you show a gun in Act I it had better be fired in Act III?  After that, there are at least three mentions of Don being old, most of them coming from Megan.  After the party, Don says that it’s too late, when Megan suspects that the reason he didn’t like the party was because of his turning 40.  Too late for what?  In season one, my wife called her shot while we were watching the opening credits one night.  She predicted that the show will end with his death.  She may be right, but will it be a literal death, or a death to Don Draper/re-birth of Dick Whitman?

The two hardest working people at SCDP, the star-crossed former lovers Pete and Peggy, are as frustrated as ever.

Pete is being driven crazy by Roger’s meddling and a lack of an office commensurate to his sense of self-worth.  In fact, he calls a meeting where he lays siege to Roger’s hideously ugly office.  This sets off a funny exchange between the hapless Harry and Roger, where Roger bribes Harry to ceding his office to Pete.  Roger knows his days are numbered, but he’s not yet ready to give up the ghost.

Is it me, or does Pete’s house look a lot like Don and Betty’s old place?  As usual, he’s never satisfied.  He’s got a pretty wife, a house in the burbs, a daughter, and he’s partner, but it’s not enough.

Peggy has become a martyr, never missing an opportunity to kvetch about working yet another weekend…alone.  Don’s happiness has left her sour and disoriented.  After Stan nearly blows the surprise party plans, Peggy gripes about having to interrupt her weekend working for his frivolity.  “I don’t recognize that man (Don).  He’s kind…and patient.”  Stan says it galls her.  “No,” Peggy says.  “It concerns me.”  Peggy knows Don as well as anyone alive, but she can’t fathom and doesn’t like this fat and lazy version of her mentor.

This could be the watershed moment in the series.  After a flamboyantly gay black man gives the honkies from SCDP some instruction, we are taken to the hallway where 50’s clad Don is drunkenly and playfully kissing and fondling his wife Megan, dressed in a modishly short black dress.  It’s a picture of the generation gap.  And who, but who do they meet in the hallway, but Roger Sterling, Mr. WWII, late for the party.  What a nice touch of symbolism.

Snippets of conversation: Bert arguing the Domino Theory with Peggy’s radical boyfriend, Megan hanging with the band, the younger set smoking pot on the balcony, Peggy & Pete confirming once again that they are alike in their workaholism.  Pete: “I was taught that sex, religion, and politics are off-limits for party talk.”  Trudy: “What does that leave?”  Peggy: “Alcohol and work.”  Pete toasts her.

There is a stark contrast between young and old at the party, with Don landing squarely on the old side.  For the first time, he seems stiff and anachronistic, especially in the face of Megan’s song.

After the party, Don picks a fight with Megan when she won’t leave him alone to sleep.  It’s an a-hole move, and she takes it hard.

After the party, we get the business with Pete, Roger, Harry, and a bigger office.  We also get a sideline having to do with Layne finding a wallet in a cab.  After he offends a black cabbie, he becomes obsessed with the “girl” of the wallet’s owner.  It’s a very sad thing to see him flirting with this girl.

We see Don shaving with the gift shaving brush the kids gave him for this birthday, yet another connection to antiquity.

Joan sees Roger and Don’s prank ad aimed at Y&R and suspects that SCDP is about to get rid of her.  This prompts a surprise visit to the offices to see what’s up.  A new receptionist treats her like a stranger.  Roger treats the baby like one.

Later, Megan and Peggy have words over some kvetching that Peggy did to her and Don at the party that Megan believes may have set Don off.  She blames Peggy for the rift.  Once the hurt lands, Peggy apologizes for her behavior.  Megaon, who’s feeling the pressure of being Don Draper’s wife AND SCDP employee, blurts out “You’re all so cynical.  You don’t smile.  You smirk…Who wouldn’t want a surprise party?”  She doesn’t understand these people.  She asks if she can leave early, that she doesn’t feel well.  Peggy’s initial response is to ask if Don is mad, but once Megan leaves, she goes to Don and confesses her frustration and apologizes.

Don, upon learning about Megan’s emotional state, rushes home to see her.  After a bit of cold shoulder, Megan slips out of her robe and begins to clean, dressed only in black bra and panties.  Don tries to talk to her, but she refuses.  She calls him old.  He forces himself on her, and she gives him.  They make love on the filthy white carpet, stained from the events of the party.

After their sex, they share a tender moment and Don explains why he didn’t want the party, that he didn’t want his co-workers in his home.  His compartmentalization was compromised, and he didn’t like the loss of control.  Further, he goes on to renounce his work and declare that all he wants is her.

The episode ends with a series of vignettes of the main players, the creepiest of which involves Pete and a neighbor he rides into the city on the train with.  They are playing cards and talking about pools and bonuses.  The guy says he never trusts in Christmas bonuses.  After a pause he says he hopes he’s dead by Christmas.

Finally, the Y&R prank comes home to roost.  Dozens of applicants show up to apply for jobs at SCDP, taking the guys at their word.

And thus begins a new era at Sterling, Cooper, Draper, and Pryce.

Perhaps it’s not that Mad Men the show has lost its way – only the principal characters.