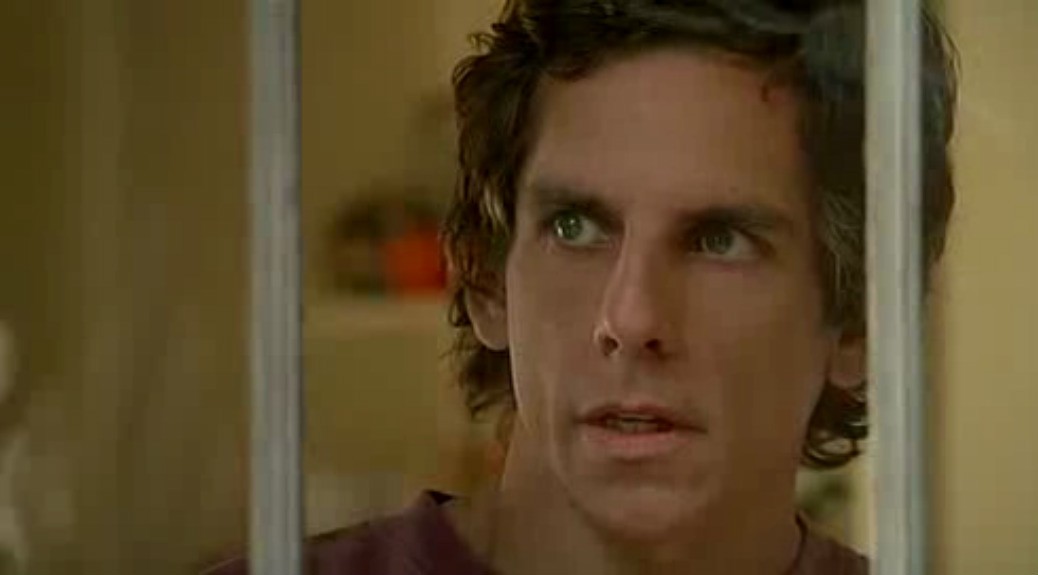 In The War of Art, Steven Pressfield’s oft-quoted meditation on the act of creating, he describes the great enemy of our creative impulses, that constant negative force that seeks to block us from rising to our higher level, a mocking, doubting-Thomas voice that rises up to tear us down when we strive for something better.  Pressfield calls this force Resistance, and in his cataloguing of the methods employed by Resistance to keep us stuck where we are, he could have included a DVD of “Greenberg”, the latest release from Noah Baumbach, the director of The Squid and the Whale, Margot at the Wedding, and co-writer of Wes Anderson’s The Fantastic Mr. Fox.

Roger Greenberg, played by Ben Stiller, is a man plagued by the fallout of a colossal failure from fifteen years earlier.  When we meet him, he’s just been released from a New York psychiatric hospital and has travelled to Los Angeles to housesit for his more successful brother.

It turns out that Roger was once the front man for an up-and-coming rock band, and on the eve of making it – of being signed by a major label – Roger freaked out – gave in to Resistance – and single-handedly killed the record deal, along with his band-mates’ careers in music.  Roger ended up in New York, a carpenter, cynic, and a writer of sarcastic and angry letters to companies and governmental agencies that don’t measure up to his perfectionistic standards of excellence.

Once in LA, Roger re-connects with old friends, like former band-mate Ivan, who know nothing of his breakdown, and are   He declares that he just wants “to do nothing for a while,” which is perhaps the highest expression of Resistance.  It’s also a project at which he fails miserably.

First, he re-connects with an old girlfriend, played by Jennifer Jason Leigh, at a party and learns that she’s going through a divorce.  She reminds him of himself pre-collapse, and he sets out on a half-hearted attempt at rekindling the flame.

Second, and more pivotal, is Florence, played by indie it-girl Greta Gerwig, the personal assistant of Roger’s brother.  Florence is a woman cast adrift in her mid-20’s, alone and unsure of what to do with her life.  That is, until she meets Roger.

Having gotten his old girlfriend’s phone number, Roger can’t bring himself to call her.  Instead, he reaches out to Florence, time and again, to avoid being lonely.  An unlikely bond takes root as Roger at first uses Florence, but comes to depend on her good will and unspoiled nature to help him regain himself.

But it ain’t easy.  Throughout the film, Roger pushes Florence away, in favor of his quixotic pursuit of the old flame.  It’s this inability to let go of the past emerges as Roger’s (and Florence’s) primary stumbling block to contentment.

Greenberg is filled with fine performances, with Ben Stiller leading the way.  Though he’s played variations on this angry, dysfunctional guy before, Stiller has never been this good, this complete in his portrayal of a deeply flawed character.  It’s a testament to his performance that we root for him, even as he behaves terribly.

Similarly, Greta Gerwig takes a spin in familiar territory playing a girl who’s just getting started without a clue as to where she’s headed.  See her in Nights and Weekends and Hannah Takes The Stairs and you’ll see a progression from Mumblecore goddess to mainstream movie star that is as seamless as it is appealing.  Gerwig keeps us from writing Florence off as a masochistic loser by infusing her with depth and sureness of purpose, even as we question her choices.

Rounding out this fine cast is Rhys Ifans, from Notting Hill, Roger’s former songwriting partner who has struggled with life after music, but comes to not only accept but also love the life he’s struggling to maintain.  As Ivan suffers through Roger’s self-obsessed rants and tantrums, he finally explodes on Roger near the end of the movie, and as he vents his anger at Roger’s thoughtlessness, he inadvertently challenges Roger to a new mission.  “…to embrace the life you never planned up.”

With credits that include Kicking and Screaming, The Squid and the Whale, Margot at the Wedding, and now Greenberg, Noah Baumbach is building an admirable catalog of very good films that feel like they could have been adapted from great American novels, complete with memorably quirky characters that challenge the conventions of what film heroes and heroines are supposed to be. Roger Greenberg is his most daring yet.  In giving us a protagonist who is angry, whiny, self-absorbed, and a whole host of other negative traits, Baumbach challenges us to see past the outward expression and find ourselves in Roger’s struggle.

The people in Roger’s world all roll with life’s punches and fight Resistance in their own way – some more successfully than the others.  And by coming home, at long last, Roger must decide whether to stay mired in the past or join the fight for an uncertain future.