Warning: Parameter 2 to wp_hide_post_Public::query_posts_join() expected to be a reference, value given in /homepages/20/d387371247/htdocs/wordpress/wp-includes/class-wp-hook.php on line 288
 Sports | ScottSlucher.com 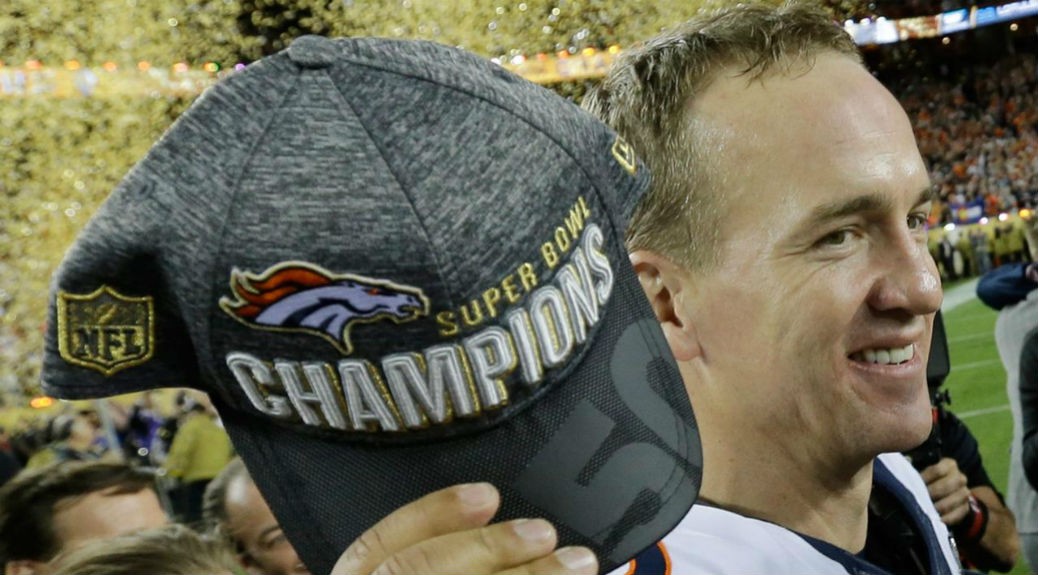 
By all accounts, Peyton Manning is a smart businessman, with an estimated net worth of $191 million. At the conclusion of last night’s Super Bowl game, there was a much joked about kiss on the cheek given to Papa John’s CEO John Schnatter, a business partner. A few moments after that, in an on-field interview and then later, in an interview with CBS’ Jim Nance, on the Super Bowl award podium, Manning was asked about his future. His response, in both situations, seemed to be a well-rehearsed spiel about first-things-first, which included kissing his wife and kids, celebrating with teammates and drinking a lot of Budweiser beer.

That’s right. It seems that Budweiser and Manning cooked up a little deal wherein the Super Bowl winner, on the biggest platform in sports, would pimp Budweiser beer the way MVP’s used to pimp Disney World. With some athletes, the move might appear wooden and contrived, but the winsome Manning pulled it off as though kicks back with a six-pack of Bud after EVERY game. Shrewd move.

Where Manning may not be so smart is in deciding whether this is the time to retire from the game. To be fair, it’s not a cognitive problem, but one of emotions and denial, as in the stages of grief kind of denial. You see, Peyton Manning is facing the inevitable question that every professional athlete has to face at some point in his or her career – “When is it over?”

A couple of weeks ago, former New York Giants and Oakland Raiders lineman Justin Tuck called it quits. In an interview with a sports talk radio outfit, he admitted that physically, he still had some mileage left on the tires, but mentally he was done. Further, he’d made a deal with himself some time earlier, he said, where he’d hang it up when he wasn’t able to fully commit physically and mentally. This year, that bell went off and he honored the contract he made to himself. He leaves the game happy, fairly healthy and free from regrets or embarrassment for having stuck around too long with diminished skills.

Justin Tuck is part of a minority of professional athletes who look at the game from a rational standpoint and try and keep emotions from the decision of when it’s time to retire. Of course, most professional football players are pushed out of the league against their will, either because of substandard performance or injury (the average NFL career is 3.3 years).

Of those who are fortunate enough to avoid injury and sustain a lengthy career in the league, many if not most stick around past their prime. And why not? It’s nearly impossible not to merge one’s identity with career, and in the case of pro athletes, those careers extend back to elementary school and Pop Warner Football leagues. A 35 year old football player with diminishing skills may find it impossible to imagine doing anything else when he’s been known as a stud player for 25 of those years.

So the temptation – the denial part of the equation – is to stay around just a little longer. Work a little harder. Take on a different role. Do whatever it takes to stay in the only game you know just one season longer. It’s a deal with the devil that has played out sadly for many a pro athlete. I think of Joe Namath, O.J. Simpson and Brett Favre, just to name a few, who in their final season were mere shadows of their former selves. Because they didn’t have a Plan-B for their lives, they risked further damage to their bodies, not to mention their reputations, by struggling to stick around – usually with a shitty team.

Once Peyton Manning finishes kissing and hugging and high-fiving and drinking all that Budweiser, he’ll have to make a big decision to make. After last night’s game, I doubt there’s a sports fan alive that thinks or hopes he’ll come back for another season. I’d bet a year’s salary that the Broncos don’t want him back as a player. The decision seems pretty cut-and-dry, but when you’re facing a watershed moment as big as this, it’s not a rational decision. It’s emotional. And Peyton Manning is famous for his love of and devotion to the game of football.

The good news is, he’s already built his next phase career track, with all the Papa John’s franchises and other deals he surely has going. Let’s hope, for his sake, that Manning can be like Justin Tuck and fight through the emotions and see just what a gift he’s been given in being able to go out on top, as the champion of the world.

I’m betting he will.