Warning: Parameter 2 to wp_hide_post_Public::query_posts_join() expected to be a reference, value given in /homepages/20/d387371247/htdocs/wordpress/wp-includes/class-wp-hook.php on line 288
 Cartel Land | ScottSlucher.com 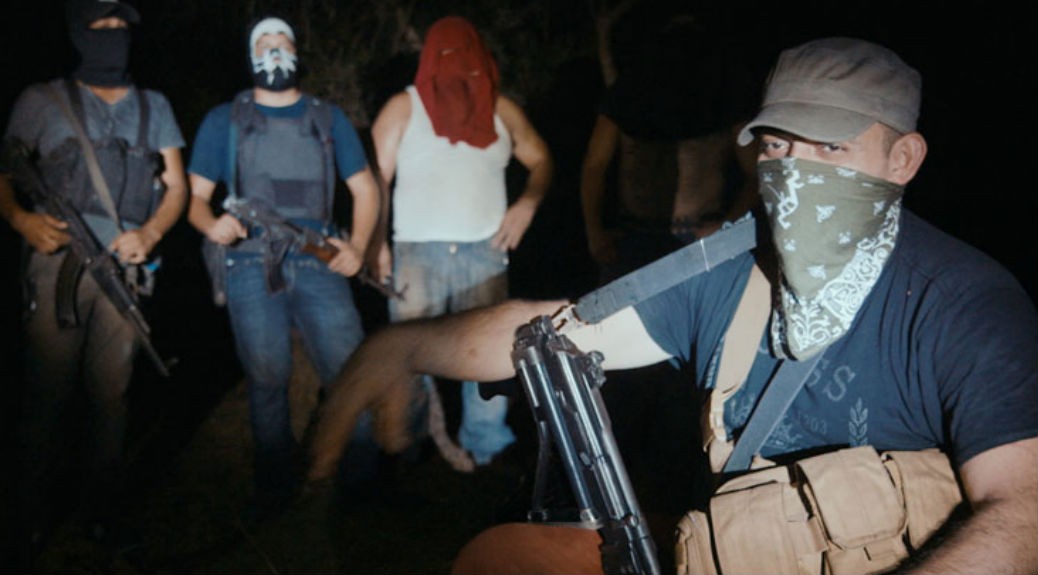 
A buddy of mine likes to tell me that drug use is a victimless crime. For people who think like this, I give you Cartel Land,  an Academy Award nominated documentary that give us an up-close view of the impact of the drug trade by examining two groups of citizens trying to do something about it. It’s an amazingly intimate portrait that gives us a seldom seen perspective. 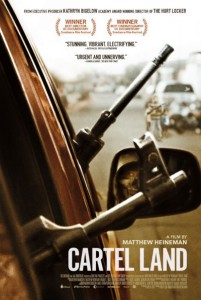 Cartel Land attempts to make sense of the complexity of the drug trade between Mexico and the United States by focusing on two vigilante leaders – one on the Mexican side and the other on the American side of the border. By going micro, director and camera man Matthew Heineman is able to make real the abstract nature of the tragedy and absurdity of the so-called War on Drugs.

On the American side of the border, in Arizona’s Altar Valley, we meet Tim “Nailer” Foley, an American vet around fifty years old who has organized a small vigilante force dedicated to patrolling the border and stopping the movements of the Mexican drug cartels. It’s dangerous work, and Foley has skin like leather and clear blue eyes reminiscent of the mythological American Cowboy.

On the Mexican side, more than a thousand miles from the border in the state of Michoacán, we meet Dr. José Mireles, a physician from a rural community overrun by a cartel known as the Knights Templar. After seeing many of his friends, neighbors and family members beaten, raped and murdered by the gangs, Mireles took a stand against them, and on February 23, 2013 launched a vigilante effort called El Grupo Autodefensas that was initially very effective in turning back the tide of lawlessness.

Heineman was allowed to embed himself in each of these groups, seemingly alone and armed with a light and portable camera rig that allowed him to participate in patrols and raids with the vigilante groups where he was often exposed to gunfire. By being approved by the leaders of each group, he was able to film interviews with principal participants and victims that paint a chilling picture of the high stakes each group is playing for.

Foley and Mireles are each dismissive of the desire of their respective governments (as well as the government on the other side of the border) in bringing an end to the drug trade. I must admit a cultural bias that makes believing in Mexican corruption an easier pill to swallow than what is either American corruption or at least callous indifference to the flow of drugs and people who are smuggled across the border with little resistance. But Foley and his band of militants have no such troubles.

To his credit, Heineman deals with the controversy that accompanies each of these groups.

In the American camp, Foley is presented as a clear-headed, fair-minded pragmatist, willing to climb into bed with survivalists, white supremacists and other fringe elements so long as they share the same objective, which is to protect the American border from what Foley perceives as the forces of evil – that is, the drug cartels. Heineman interviews one such individual who states without blinking that good fences are effective and necessary in keeping incompatible races apart. He also shows news clips that we’ve all seen that characterize the vigilantes in a negative light as violent, hateful people.

Foley himself is honest and open about his troubled past, which includes drug and alcohol abuse. But after a near-death experience some 20 years back, he’s now clean, sober and on a mission to make a difference. To put a dent in the universe.

As for Mireles, it’s a trickier tale. When we meet him, Dr. Mireles is a handsome, mustochioed man nearing 60. Tall and graceful, with an eloquent and charismatic appeal to his neighbors. His appeals to one community after another to join his movement to put an end to the mindless violence of the cartels is like something from Hollywood.

And the people followed him.

As the Autodefensas cleared out one village after another, Mireles’ celebrity grew, which also drew the attention of not only the cartels but a nervous federal government, which must have worried about a popular uprising against it. I had a sense, watching Cartel Land, that Mireles was a goner, and right after the thought struck me, the description of the suspicious nature of a plane crash involving Mireles is revealed.

Without the galvanizing force of Mireles’ leadership, the Autodefensas spirals into chaos with counter-offensives from the cartels as well as corruption and in-fighting within the group.

To make mattes worse, Dr. Mireles is open about his weakness for women. At first, he’s shown first as a compassionate neighbor, then as a caring doctor and finally as a doting husband, father and grandpa, but we also see that “El Doctor” also has a thing for pretty young women, which becomes a perfect metaphor for the murky waters of the War on Drugs. Nothing is as it seems. Nobody is pure. Good and evil often co-exist within the same men at the same time.

On the first anniversary of the Auodefensas movement, Mexican president Enrique Peńa Neto made a slick maneuver designed to eliminate the threat of the Autodefensas movement while simultaneously appearing to support it by absorbing the vigilante group into the federal government and giving it legal status and a new name.

Suspicious of this move, Mireles refuses to go along and stands alone against the government that has shown that it has little interest in doing serious damage to the cartels that have infiltrated its halls of power. Not long after, Dr. Mireles was captured and imprisoned. Today, he is in a remote prison in a kind of legal limbo with his health deteriorating as the Mexican government decides what to do next.

The last we see of Mireles, he owns up to his mistakes and unlike the two governments in question, takes full responsibility for his actions.

At the same time, the vigilante movement he spawned has devolved to the level of the cartels they were created to fight, with corruption, in-fighting and lawlessness their signatures. In this case, evil has won out. As we hear two times, from Mexicans on both sides of the fight, “For now, I’m the lucky one.”

Back in Arizona, things are a little better. Without a federal government out to stop him, Foley is adding to his numbers and can point to small victories as they regularly intercept small gangs of scouts who are the eyes of the smugglers. He characterizes his efforts as an elaborate game of hide-and-seek, which is okay with him. He’s in this for the long haul.

In the final analysis, I suppose that Heineman’s message is one of hope. Having seen what people can do when they stand up to tyranny, he has shown us that the cartels can be beaten as long as we have people like Mireles and Foley who are true believers with nothing to lose. For though they may be flawed, at least they can’t be bought.

After watching Cartel Land, I defy anyone to say that drugs are a victimless crime.