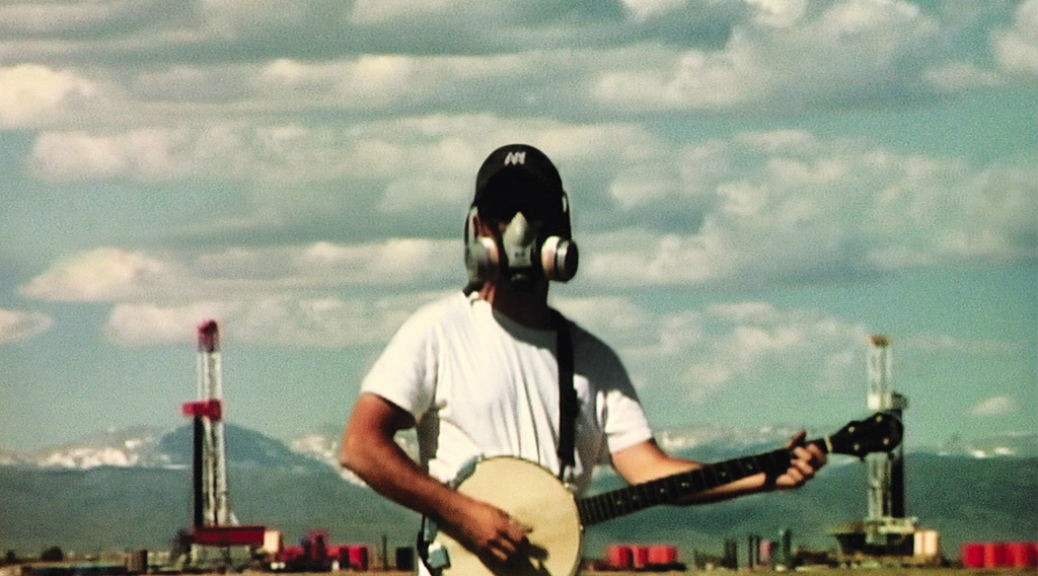 In 2006, a guy named Josh Fox received a letter from a company wanting to lease his land for the purpose of drilling for natural gas.  Fox lives in eastern Pennsylvania on a tributary of the Delaware River.  His parents bought the land, and with the help of some friends, they constructed the house that he calls home.

The letter described the Marcellus Shale deposit, that his house sat above, as the Saudi Arabia of natural gas, extending from New York to Tennessee.  The company offered nearly $100,000 for the drilling rights, and piqued the curiosity of Fox, a banjo playing writer/director.  Gasland is the result of his curiosity.

Fox starts off by referring to his parents and their friends as hippies and playing an old black-and-white clip of Pete Seeger singing “This Land is Your Land,” which is fitting because Gasland is structured like a folk song along the lines of Woody Guthrie’s “1913 Massacre.”  These references can be seen as a warning of where he’s going.

Gasland begins with a question, and leaves the tranquil woods of Fox’s home on a quest for answers, and like a good folk song, it tells the stories of common people – who look a lot like you and I – victimized by faceless companies with generic names like Encana, Chesapeake, and Williams.

Fox does a masterful job of finding and filming people so sympathetic that you never think to question their stories.  A couple are able to catch their tap water on fire with a lighter – as it comes out of the faucet.  Others have chronic illnesses that arose once drilling began.  They are as American as apple pie.  Fox also uses an effective Do-It-Yourself aesthetic that is both beautiful and deceptively amateurish, which underscores the underdog tone of the film.

As Fox travels further west, the density of the drilling increases to a point where he enters a geographical region known as the red zone.  This refers to red dots on a map, so thick they bleed together like a stain.  Remote places like Wyoming, Colorado, and Texas are portrayed not as idyllic escapes from the stresses of city life, but as polluted as a place like Los Angeles.

The cause of all this pollution?  Hydraulic Fracturing, or fracking as it’s called.  It’s a process where huge quantities of water, sand, and chemicals are shot thousands of feet down into the ground to loosen the shale deposits and free the natural gas.  It’s a process that’s been in practice for decades, but the 2005 Energy Bill enacted regulations that, according to Fox, exempted natural gas drillers from safe drinking water laws, the Clean Air Act, Clean Water Act, and just about all environmental regulation.  At the center of this regulatory laisez faire was Vice President Dick Cheney and Halliburton, the company he once ran.

Along with the tales from ordinary folk, Fox brings out respected scientists, among them a MacArthur “genius grand” recipient, who voice dire warnings of polluted drinking water and air fouled by neurotoxins that cause a host of ailments such as sterility, loss of smell, loss of taste, and a variety of cancers.

It wasn’t until hours after I’d finished Gasland that I wondered about the accuracy of Fox’s claims.  I Googled the film and found many rebuttals to the film, from natural gas industry spokesmen as well as a few journalists, and the comments weren’t your run-of-the-mill polite disagreements.  Hardly.  Judging from the venom of the insults, Fox has touched a raw nerve made worse by the nomination of his film for an Academy Award for Best Documentary Feature.

Rent Gasland then read the statements from the industry people and independent labs, and then decide for yourself whether we have anything to fear.  Even if Gasland is full of hot air, Josh Fox will have gotten you to think, if not act.  And that’s no small feat.